Hope at the Host Stand, Plus More Reasons to Hate Yelp

A glimmer of hope has appeared in the trouble surrounding the host stand of late. This week, for a change, the boss entrusted hosting duties to his teenaged kids. They calmly took all the business that streamed in, even those "pesky" walk-ins at. The mood of the staff was blissfully peaceful while we rocked the front-of-house.


Yesterday's inventory was even less torturous than usual, in my newly perky mood. It helped that a couple of crotchety lunch regulars were seated outside the wine room door while I was finishing my counts; Their old man grumblings had me stifling giggles more than once. 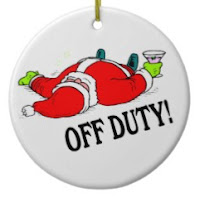 And there's the cheer of another kind bouncing around, of the more usual holiday variety. Last night the Christmas party season was kicked off right by the Lundershags, our most infamous of late-night regulars. Every year a group of our staff faithfully treks to their house for live music, a buffet of nibbles, an open bar, and a look at some over-the-top Christmas decorating that would put an OCD elf to shame. Ironically, we usually get stuck with late tables and don't make it to the party before midnight, only in time to hoover the buffet clean of some lukewarm fried things.

I even won a prize! A shiny bag with a Santa Claus on it, with tissue paper poofing from the top, making me a giddy like a second grader. A bit of funny accompanied this present: We arrived late and snagged tickets for the drawing at the last second, not hearing any info about this year's prizes. A woman approached me afterwards and excitedly asked me what I got. I hadn't checked yet, knowing from previous years it was either an ornament or piece of Christmas-themed houseware, and I was more interested in procuring a bloody mary from the bartender first. No, she told me, she'd heard they were giving away a couple trips to Reno this year. What the waa? I passed my coat to my BF and immediately got to work digging through the tissue paper. There was a flat box inside. I unwrapped the box, a small crowd people standing around the bar watching with interest... it was a porcelain Santa dish and cheese knife. 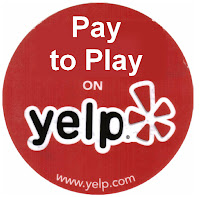 Have you heard the stories about Yelp manipulating reviews? Well, they are true. We chose not to advertise with Yelp, and my boss discovered the other day that we had more than 60 reviews, all five stars, filtered from our Yelp rating. We still have a four-star average, so this isn't particularly hurtful. Other businesses aren't so lucky.

Yelp has its own Yelp- It's mostly elite Yelpers patting themselves on the back for being awesome uber-foodies, bringing the light of their singular experiences to the world. But there are also a few haunting stories like this:

Rhiannon M., Vancouver, BC
Yelp has ruined my life. Six months ago I had about 15 reviews, a couple were filtered, and most of them were 5 star reviews. In the middle of March this year, all of my positive reviews and one negative one were suddenly filtered. All that is left for the public to see is one negative review. Yelp erroneously states that this reviewer was the first to review me. This isn't true. There are filtered reviews from 18 months prior to that.
I have lost 50% of my clients. I am on the verge of bankruptcy and losing my home and my business. I have tried to contact Yelp and they don't respond. I've tried to delete my account, but Yelp seems to have taken control of my own right to do this. The are holding my domain name hostage. I can't change, or delete my address.
I have no idea what I am supposed to do to survive this economic cataclysm.
I bet this one will be filtered!

For those of you who say, "Well, a business must suck to receive one star reviews;" I say, have you spent much time with the general public lately? You know those people who cut you off on the road, blab on their cellphones in the middle of a restaurant or let their dogs poop on your lawn? These are the same entitled asses who leave unwarranted Yelps.

Mr. Everton is making good fodder of Yelp nozzle heads over at Yelpers Who Suck. There's a good video about Yelp extortion, a few funny retorts from business owners, a "Guide to Useless Yelpers," and, of course, reviews of the reviewers. One of my favorites is about a young woman who gave a place one star because they wouldn't let her eat ChexMix at her table. I recommend taking a look around the site, and passing along any ludicrous reviews you happen to find.