Chardonnay rules our bar. Particularly our high-end pour, always a big-ass chardonnay, served in a big-ass glass. Gallons of the sweet, buttered fruit juice practically evaporate amongst the raucous bar crowd, who return day after day to preen in the mist of alcohol and conversations held too loudly. From makeup-ed blondies, grumpy retirees, to macho bar dudes, the variety of participants in this contingent is impressive.

Sociable and cliquish, group-think is in full effect with this crew. Both tough-guy bartender and breast-surgery house wife enforce a policy of collective brand acceptance, even if someone may sheepishly deviate from the court of opinion. If it does not taste like crushed-up, charred popsicle sticks, Orville Redenbacher and sticky mango, and have the right branding, the wine is doomed to failure. 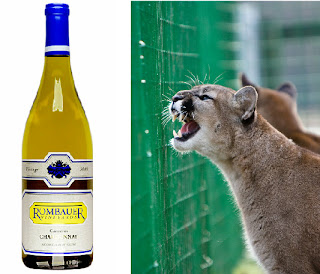 Rombauer, "cougar juice," or "Danville crack" as it is known here, was the wine that started it all. The mere mention of this brand will elicit instantaneous scoffs from sommeliers and wine geeks. Even the servers at my second (higher-end) gig like to join in the 'Bauer bashing. They will use the name to make a point: "This chardonnay is big, Rombauer-like," while also letting you know that they, of course, would never touch the stuff, and that it doesn't belong on their wine list. My bar crowd is blissfully unaware of this contempt.

From my standpoint, as a buyer, I have no problem giving people what they want. They can be drinking Charles Shaw for all I care, as long as they are paying good money for it. But I decided to take the Rombauer off by the glass because I noticed the style had changed; from one vintage to the next the Rombauer went from butterball-on-steroids to tasting like burned canned pineapple juice. "Everyone is moving towards a lighter style now," a winery representative is reported to have said to one of my customers. Uh-uh, not at my bar. And considering the packaging itself for the Rombauer became lighter-weight, it looked to me as though they'd stretched out production and lowered costs: less glass, less oak, lighter fruit intensity, while still cashing in on the Rombauer name.

So, why lose momentum? I figured I'd be ahead of the curve and pull the Rombauer before the bar could grow disenchanted with the new version. I'd give them Frank Family, a consistent restaurant favorite. They were disgruntled at first, and kept asking about the Rombauer. Then suddenly, they became addicted to the Frank, and this pour took off like wildfire. We had struck gold again, selling glass after glass of ripe, tropical-fruited goodness.

And then... Well, maybe working with an experienced sommelier at the other gig put weird ideas into my head‒Thoughts about putting on a "sophisticated" pour. At that price range, I had plenty of options. I chose the '09 Ramey Russian River, a huge chardonnay but one with elegance and refinement; a step away from the top shelf at BevMo. Balla' juice, if you will.

On the restaurant floor, the Ramey flew. Good weekend customers who knew their wines would light up at seeing this offered by the glass. "This is simply delicious" I was told by many a suit. But the grumblings had started at the bar. "They keep asking for the Frank," the bartenders told me.  "Remember when they said that about the Rombauer?" was my reply. "Let's give it some time."

I added the MacRostie chardonnay to the line-up as a peace offering to the contingent, but that spelled the death of the high-end pour. Sales of my Great Yellow Hope dwindled down to nothing, with bottles only moving on weekends. The bar had voted Ramey off the island. Then one night, a good regular of mine looked up from her table with imploring eyes and said: "I really miss your bigger chardonnays." It was the final, soul-killing blow.

By bigger she of course meant sweeter, as the Ramey is a monster wine. All she wanted was something familiar, easy to drink, and comforting.

"Don't challenge me," her eyes said. "Just make me happy."