For an introduction to the art of winning see Part One.

In the home-stretch of the evening, after business has dwindled down to a few lonely tables, they appear at our door. The Lundershags, looking like two ghosts from the sixties: Tim, with his thick, owlish aviator glasses and buzz cut, and Sandy, with her hair pinned tightly, small face fringed with silver-blond bangs, and shoulders hugged by a white knit wrap. They quietly saddle up to the host stand, oblivious to the stir their presence has caused behind the kitchen doors. Despite their unassuming demeanor they are here for one thing: to get their party on.

Los vampiros, the vampires, are here; the news always spreads as fast as breath to the staff, instantly eliciting moans of disappointment.  Plans of a big meal, a refreshing beverage, a conversation with a loved one, or just sleep, are now on a two-hour hold. The servers scurry to start counting the remaining tables, as whoever has the most is stuck closing, their turn to be chained to restaurant 'till almost midnight‒Tag, you're it! As we say. Those who are already done immediately feel like they've scored the jackpot for the evening.

This couple does their best to extend whatever rocking lifestyle they lived back in the day into the wee years of their lives. To start: a vodka rocks for the lady (with a large straw, not those dinky little ones) and a 100-proof whiskey water for the gent. They settle into their usual corner, and have another round or two before they even contemplate the menu. Little Sandy, despite looking like a doting grandma who likes to bake cakes, can put away liquor in a more controlled, efficient fashion than your average 25-year-old bartender. During their course of their meal, she has about three vodkas and finishes with a double Tuaca, and who knows how much more she imbibes before their usual bedtime of 5 am. They sometimes laugh a bit at us servers, as we are yawning as midnight approaches. Amateurs, they must think.

No one hates the Lundershags (well, no one except one of my bussers who has to wake up at 6 am most days) because they are kind and tip well. Though they wait until five minutes before closing to order, their routine is at least familiar and easy. They even invite many staff members of the restaurants they  mildly torture- frequent to their yearly Christmas party, complete with prizes, free booze and lots of food. They gravitate toward the oddballs, the musicians, the tattooed, the scruffy; they are funny to talk to and we enjoy trying to figure out what exactly they were up to 30 years ago. We treat them well, as they are part of our weird little family after all. The worst thing they've ever been subjected to at our restaurant is perhaps overhearing our busser not-so-quietly cursing up a storm in his station; At other restaurants, they haven't been always been so lucky.

Let's preface this discussion by saying that servers are not the most mature lot. With sleeping in late most days and the fact that it's easier to get alcohol than food when leaving a shift at 11 pm, the average maturity level of a server is about that of a trust fund kid who has just turned 18. Add to that a certain unhinged quality that comes from being berated like an misbehaving child for doing something as slight as forgetting to bring a straw for someone's water, and there is potential disaster afoot. 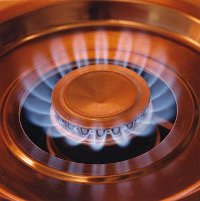 A case of burble butt at work is a complicated situation. It's hard to find a good place to alleviate a little gaseous pressure, as there is, at every turn, someone who will be blown up by it. The best a server can do is run to the bathroom and let try to let the sucker go peacefully, all the while praying there won't be a customer waiting on the other side of the door, who they will have to sheepishly face. Now this is the behavior of mature servers, at a restaurant with nice management; For an unhappy crew, any gifts of hot fetid air can instead be carried around during service, locked and loaded for the staff to unleash at will.

At a restaurant very similar to mine‒same prices, same style of food, even most of the same regulars‒the art of "crop dusting" was at one time very popular. The game was simple: another server bitching about a shitty table? Oh here, I got that for you, and whoever had a stinker on deck would make a quick pass by the offending table and drop a stealth nugget of butt stench. Or a server was acting like a jerk? Again, a little walk through their station to let go some bottom rumblings upon any table who happened to be, say, enjoying an expensive bottle of wine. Unlike my restaurant, where we genuinely like the owners and would never dream of violating the air supply in such a way, at this spot the owner was a giant dick face. The servers spread their discontent in the form of noxious intestinal tumult, of which there was a seemingly unending supply; especially as their favorite shift meal was a creamy pasta dish, which they would load with fresh cut jalapenos. The UN could have posed a raid of the restaurant for the WMD-level of fire butt collectively held by the staff.

It was almost inevitable that the Lundershags would be dusted at some point, as years of weekly visits had taken their toll on the staff. However, they ended up being the recipients of one of the most evil clouds of rot butt that the restaurant had ever seen.

The servers were standing in the back server station, the one place where the boss couldn't watch them. The Lundershags were in their usual spot, maybe 20 feet away, one of the few tables remaining on a slow weekday night. "What shall we do?" the question was posed. One of the servers had the answer‒he was Mexican, and his chili-eating habit had left him that night with some extra-fiery volcanic activity in his guts. He made a quick swoop through his station to straighten a few chairs, and then paused, tilting his rear slightly to the side. He returned to the server station grinning. The others servers didn't know it yet but he'd felt it; he'd just unleashed the hottest, most lethal of silent-but-deadlys.

The servers almost immediately began to gag; the smell was thick enough to taste and strong enough to floor a 300-pound bouncer. They were flushed from their cubby-like server station and to the other side of the restaurant, watching in horror as the Lundershags were left to eat their meals under the settling fart cloud. One of my friends had to eventually brave this no-go zone to retrieve the couple's plates. Even with the stench in retreat it was still foul enough to make him hold his breath. The Lundershags bore the injustice brought upon them well‒ While they looked sufficiently discomforted they didn't say a word about it, knowing perhaps that for their repeated incursion into the hollowed after-hours' space of the restaurant they would eventually run into some "playful" opposition.

Whether the Lundershags ever deserved to be fart bombed to this degree is up for debate. They've never done anything to me, personally, to warrant this kind of wrath from my end. I will admit, however, that on a slow night when I'm closing server, and I watch them quietly creep up to the host station, I have this image‒ the two of them silently chewing their food in a hot cloud of SPD‒ to comfort me. I'm still thinking aww, damn, but at least I have something to genuinely smile about.