The Nicest Thing I Ever Did for a Customer

I believe in niceness. I know this seems a bit odd considering the amount of bitching I do here, and maybe I indulge in the occasional passive-aggressive ploy, but at heart I'm a giant sappy-pants and am genuinely kind to others. So often though, thoughtful behavior goes unnoticed and unrequited. I supposed this is the root of my bitchyness; People's general lack of morality or niceness is depressing. 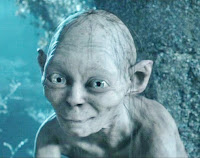 The recipient of this act was hardly a likely suspect. He was slightly built and odd looking; picture Sméagol, with clothes, a tan, a mop of grey hair that was always askew, glasses and beady eyes. And, oh yeah, dude was definitely a Creeper. He was a counter regular at my first serving job in a breakfast café, remarkable because he would leave an assortment of change for a tip (usually under a dollar), and would stare at us with his dark, pinprick eyes, making the occasional off-color comment. Whatever he said was usually hesitant and choppy, as if he had little practice talking to people.

I was alone at the counter one day, with just the chef and a line cook in the kitchen. It was early evening.  We had just started doing dinners, so we were painfully slow- not unexpected considering the porcelain cow sugar containers on the tables and other assorted farmhouse decor. Sméagol came in to purchase a coffee at the register. He was smiling and excited for once, saying more to me than usual, though it was difficult to understand; something about getting a new job, doing his laundry across the parking lot, whatever. He left and I was thankful he wasn't staying to eat.

We finally got a couple customers so I was busy setting them up for a minute, practically forgetting that Creeper dude had ever come in. When I cruised back to the kitchen I noticed something on the register counter. The outline of the object was unmistakable, grabbing my attention‒a wad of money.

I picked it up. The bills were all hundreds. As I slowly counted them, seven in total, I was awestruck. It felt like a small fortune in my hands. This was more than ten years ago and it was the exact amount of my rent, which I was probably going to be late on given the incredibly slow state of dinners. I made good money during my day shifts but at night I was walking with like 20 or 30 bucks. I showed the chef and he was excited for me: "It was meant to be!" he said, "A gift from above!" I wasn't so sure about that. I tucked the money under the register, knowing it had to belong to somebody. I almost didn't want the responsibility of guarding over that money, but part of me prayed no one would show up to claim it and it would be mine.

No way it could have belonged to Sméagol, I rationalized. When he came in, he always got the cheapest breakfast and left a nominal tip, and, from what I'd gathered, he'd just gone through a spate of unemployment. How he could rolling around with a wad of hundreds?

But he appeared a half hour later, his rail-thin frame visibly shaking, almost white in spite of his tan. He'd just finished his laundry and realized something important was missing: his hiring bonus from his new job. "I don't know what happened," he said. He started explaining his activities in the last couple hours, how he'd checked the seat in his truck...

I slowly, heavily walked to the register. "I think I know what happened," I passed him the wad of hundreds. "It must have fallen out when you were paying for your coffee." He was beside himself with relief, his "thank yous" tumbling out in stuttering succession.

A week later he came in for breakfast. He smiled when he saw me. "Here, I have something for you," he said, and held out my prize:

A See's lollipop. And from then on he improved his tippage too: instead of leaving an assortment of change, he started tipping a full dollar bill.

As an interesting aside, I was fired from this job because they suspected me of stealing. Never mind that I was alone for months during those empty dinner shifts and not a dollar ever went missing from my till. One of my co-workers hated the boss and thought it was fitting punishment to steal from him. She didn't even need the money; she later told me, to my shock, how she went and bought potholders and other frivolous things to decorate her kitchen with the money. But I had been young and naive enough to let my rent problems be known, and my co-worker waited until she worked shifts with me to lift the money. She quit the day I got fired, as the jig was up. Needless to say, when this all came to light, we were not friends anymore.

Also funny to note: the thieving chick was also an uber-smug hippie who would lecture me on recycling and want to go on nature walks and shit.

I don't know what the conclusion of this story is. Morality is complex?  Morality is bullshit? Nice people get pooped on? I do know that I would have given the money back 100% of the time, even if it would have saved me from being homeless. My hippie co-worker would have kept that wad-o-dough, leaving Sméagol to rot, and bought herself a nice set of pots and pans, and maybe some decorative napkin holders.

Email ThisBlogThis!Share to TwitterShare to FacebookShare to Pinterest
Labels: cheap tips, Hippies, Terrible first jobs, The Creeper, The Not Well-Socialized