Boss Man vs. The Bloodsuckers

The deadline to finish our restaurant's new room was in two days. Or at least it needed to done enough that a social gathering could take place without anyone stepping on a stray nail. I poked my head through the connecting doorway, to check out whatever state of dishevelment the room was currently experiencing. The reek of new carpet and paint greeted my nose. Things were shaping up.. sort of. 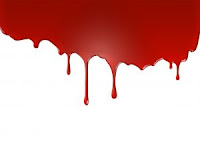 I heard the boss' voice drifting in from the sidewalk. Through the open front door I spotted a saw horse outside with the baseboards laid on top, and a paint can on the ground. "Alright, bye, good to see you," the boss said, then stepped back into the room.

"Hi there," I called over. He was coming toward the back, in sweats, a plain white T, and tennis shoes, looking frazzled.

"Hi," he grumbled, barely making eye contact. Hmm, had I done something wrong? I wasn't intruding, or needing anything-I was in my plain clothes too, just finishing up inventory. Our overflow wine storage was now in the new room's closet.

Nope- His son appeared a moment later to check in with him, and whatever rant had been brewing in his head suddenly exploded.

"I swear if one more, just one more person comes by to talk to me, I don't know-My balls are going to fall off!" His whole body started moving as it usually does when he gets lit on a subject, hands rolling outwards for emphasis. "I'll be bleeding everywhere, and people will still stop and say, "Hi ___!"

The scene, while strange, had its own logic. Basically, when my boss is at the restaurant he can't get any time to himself, or at least a moment to paint a few baseboards. My boss is "that guy": you know, the owner who everyone thinks is their BFF. All day long I hear from tables, "We're friends of ___, can you send him over?" "What do you mean I can't get a reservation in 15 minutes? Is ___ there?" He could be on fire and people would be in an absolute huff he didn't personally greet them.

And somehow, people not only want his attention, they want to pin him in place and unload their whole life story. Boss man is the type of person that rarely shares a single detail about his own life- I barely even found out that he got married last weekend- yet every lonely, adrift soul (a common phenomenon on the migrant west coast) thinks he is the perfect sounding board for their travails: from tales of bad romances, latest quack diets, to where their dog pooped that morning.

"I can't ever get anything done. I don't know-" Boss man stopped abruptly, spying someone in the door trying to get his attention. Suddenly the rolling movements ceased, and he squared up. "Hey!" he called out, in the most jovial fashion, heading outside. Like a light switch, owner persona was back on.

Unfortunately, his patience for whackos and the emotionally needy knows no bounds. Maybe his own crazy history allows him this bottomless pool of empathy. His mission, it seems is to make every customer feel special. Ask him to the table? Sure, but not before he goes into the kitchen and prepares them a special appetizer. The dessert sampler plates he makes for some of our best customers are gorgeous and lovingly assembled (often leaving us host-less for 15 minutes at a time).

His reward? An endless stream of business for the restaurant, glowing Yelp reviews, and devoted group of regulars. Happy customers makes for happy staff, too.

For me, I love the fact that he's not a douche about having so many "fans." He doesn't lord it over all of us, like "I'm the bestest EVAR!" He's a real person with his employees, and the moments where he starts going off about whatever blood-sucker has currently has him in their grip, and the resulting bleeding ball issues- these are moments that inspire my loyalty.