The Crack in the Pasta

Our kitchen does use addictive substances of a dubious nature in our pastas. As Anthony Bourdain once famously said, the secret to ridiculously tasty restaurant food is copious amounts of shallots and butter. In an Italian restaurant, add white flour, cream and salt to that list of ingredients. I watch ordinarily level-headed people drool over our cream-laden, carb-filled dishes, a crust of sourdough bread sparing them from having to lick their plates. 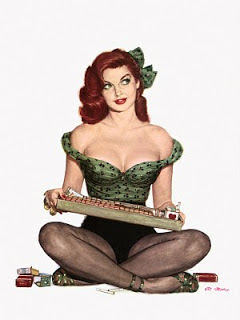 I often feel like an animal fat "pusher." Someday, I should cut out the middle man (the kitchen) and strap on one of those old-timey cigarette girl trays and start handing out garlic bread, bacon, and tiramisu wedges. I'd make a ton of tips, and my customers would be replete, slouched in their chairs, greasy fantasies satisfied.

While I can laugh at our customers for their comfort food obsessions, I know that serving staffs are usually far worse when it comes to gluttony. "Foodieism" is endemic to the industry. Solid food knowledge, curiosity and lots of cash can lead to some expensive city outings, ones involving necessities such as cheese plates, artisan pizzas, braised pork belly and silly amounts of Italian wine. I always thought this was the norm for restaurant staffs, or at least ones living near a culinary epicenter.

Then I met the Ascetics- This group of servers, who I worked with for a time at my second job, defy the stereotype of party-hard, money-burning restaurant folk. During family meal, they would ignore the kitchen-sink pasta, fried chicken or rice stir fry offerings put up on the line, and break out their Tupperwares from home; These would include such rabbit favorites as raw veggies and hummus, salads and fresh fruit. Only in California was my first thought. There was talk of gym routines, 10-mile daily runs and the Paleolithic diet.

Is there such a thing as good peer pressure? I think so, because I found these months at this restaurant's communal table to be therapeutic. I've always had the health-nut gene‒half my family works in the fitness industry‒but it's hard to have a sense of "health reality" surrounded by people obsessed with bone marrow, bacon and brie. The Ascetics helped adjust my perspective: just because I work in a restaurant doesn't mean I have to be a smoking, drinking, walking ball of cheese and pasta. So lately I've been attempting to kick bad carbs out of my diet and eat more simply (more about this here, if you like to laugh at masochists). It's a little Paleo (the diet where you gnaw on meat all day and eat tons of veggies) but with a small amount of quinoa, oats and brown rice left in for good measure.

Working under-carbed, constantly surround by everything that is decadent and extreme about American eating habits, isn't the easiest thing. Yesterday I had an apple, oatmeal and two eggs before work. Such blah food made all the rich dishes appear to be in Technicolor. I was transfixed by the desserts in particular, their details magnified: on the tiramisu, I stared at the cratered texture on its fluffy side, and the pencil thin line on the top where the cocoa powder melded with the cheese; in a bowl of gelato, I noticed the vanilla flecks popping out from the gleaming surface and the placid pool forming where the edge of the scoop met the bowl. TWICE the cold prep guy put out some pieces of extra chocolate tort and lemon tart for the staff to try, which was just too much to bear (I had a taste of the genache).

I'm experiencing some serious cashhhh money savings, however. Previously my average food bill, between trips to local organic grocery store and eating out adventures, could have paid the monthly expenses of two to three families in Guatemala. The feeling of saving money (and thus having to work less, or worry when Sprite is seating me) helps me withstand the tiramisu torture.

Anyone else influenced by an unusual (or unusually excessive) serving staff culture?