I'm sure there are Frenchies out there who would die at the idea: a group of Californian foodies attempting a Provencal feast, in the middle of January.

This endeavor was inspired by the dream-inducing Provence episode of No Reservations. One that has a million quotables about the area's beauty from an unusually gushing Bourdain. "It's like a movie, only better," he says, describing the lavender and sunflower fields, how the tomatoes burst with color. He talks about the virtues of small town life, one of simple errands in local shops and long meals in gardens.

One problem with this dream, as his guide points out: "No one sweats." Over several lazy outdoor meals, the locals address the romanticized ideal of Provence. In the past, before tourism, times where tough. The countryside is hot, dry and doesn't farm well, and their famous vegetable-based cuisine is a result of poverty, basically. They gently make fun of tourists for standing out in the streets, with the wrong clothes on and walking in the sun in the heat of the day, instead of hugging the shadows of the buildings the way the locals do.

Tony is supposed to cook for friends later in the show, and he is bluntly told not to attempt the classics, such as aioli and ratatouille; it would be like "spitting at grandma," as he paraphrases.

Such admonishments serve to inspire rather than deter certain personalities, however, and this includes my friend. And, unlike Tony, my friend did not have the "royal family" of Provence cooking in attendance to criticize any small misstep, just a few adventurous mouths to feed. Additionally he is a good cook, and owns about every kitchen gadget known to man, thanks to his wedding gift registry. 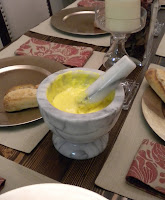 Most important among the required gadgetry: a mortar and pestle to make aioli. In the Provencal feast scheme of things, aioli is the life of the party, the condiment that enlivens the simple vegetable preparations. It is painstakingly prepared by crushing garlic, adding egg yolk, and drizzling in olive oil. Apparently, after 45 minutes of this incorporation process, our friend's arm was screaming. Though he described watching a video of a woman who was "a million years old," by his estimation, patiently stirring together this concoction for close to two hours.

Whether it was "perfect" or not, it was garlicky, eggy, creamy and pretty much made me want to bathe in it. Fortunately there was a full spread of roast veggies, baguette, and pork loin to put the condiment to better use. 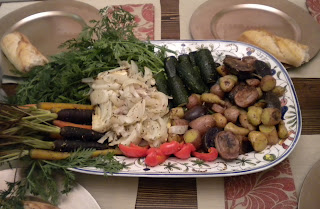 For vino, we had a few things on hand:
Franciacorta bubbles from Majolini, 1994. A bit past its prime but lively enough to handle the food.
Etna Rosato (rose of Nerello Mascalese) from Scilio. A dry, pretty Sicilian rose similar to what is consumed widely in Provence.
Chateauneuf-du-Pape from Andrieux et Fils. A Grenache-based southern French red, peppery, smooth, and medium bodied. The best pairing for the food and apparently also a WWTD (what would Tony drink). In the show Tony admits he doesn't know much about wine, but he loves his Rhone reds.

So whether Frenchies would take issue with our attempt to recreate Provence, in the end we were all too full and happy to care. 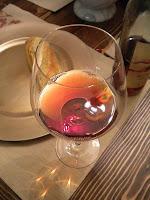 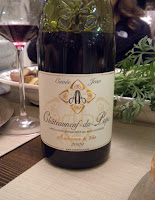